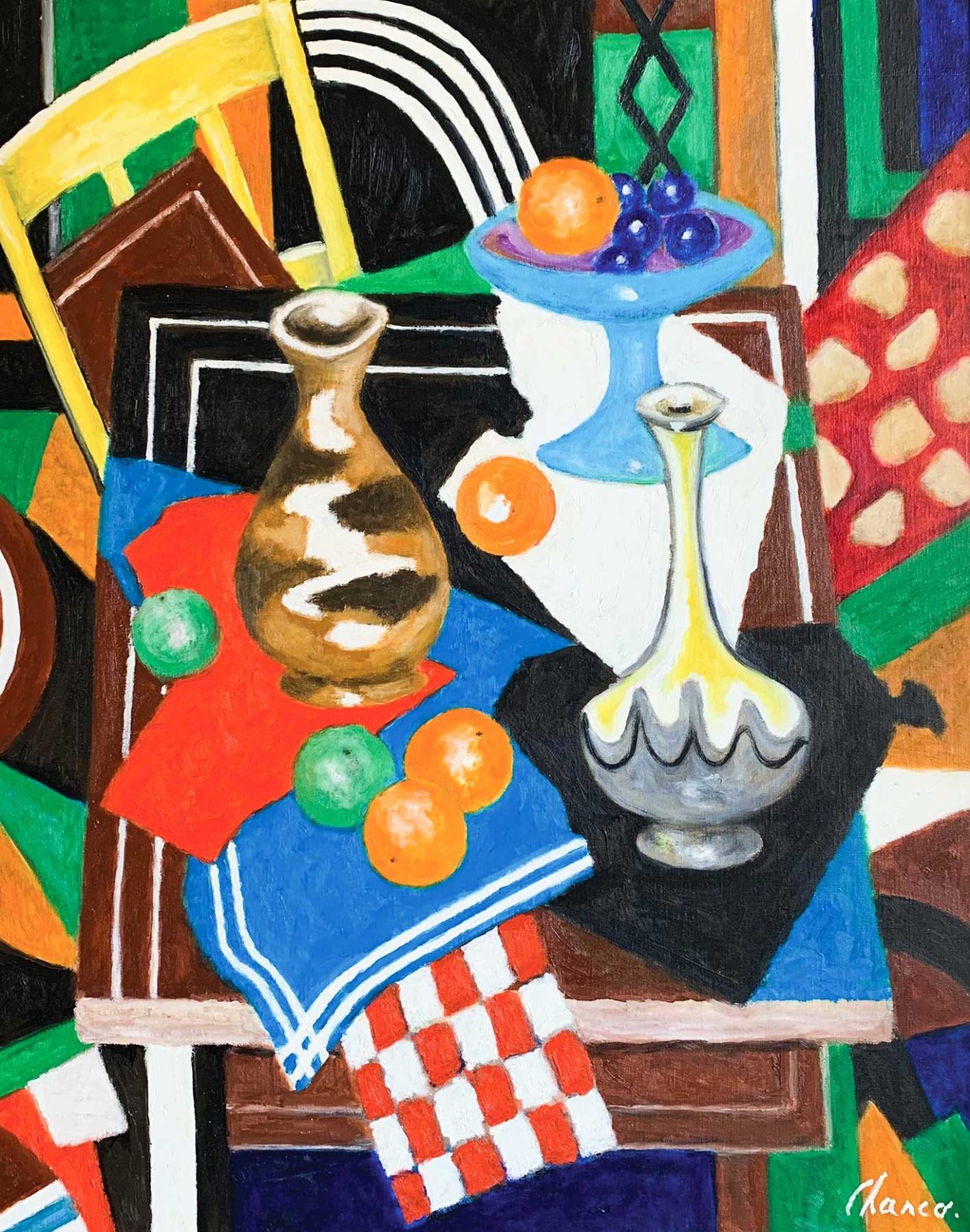 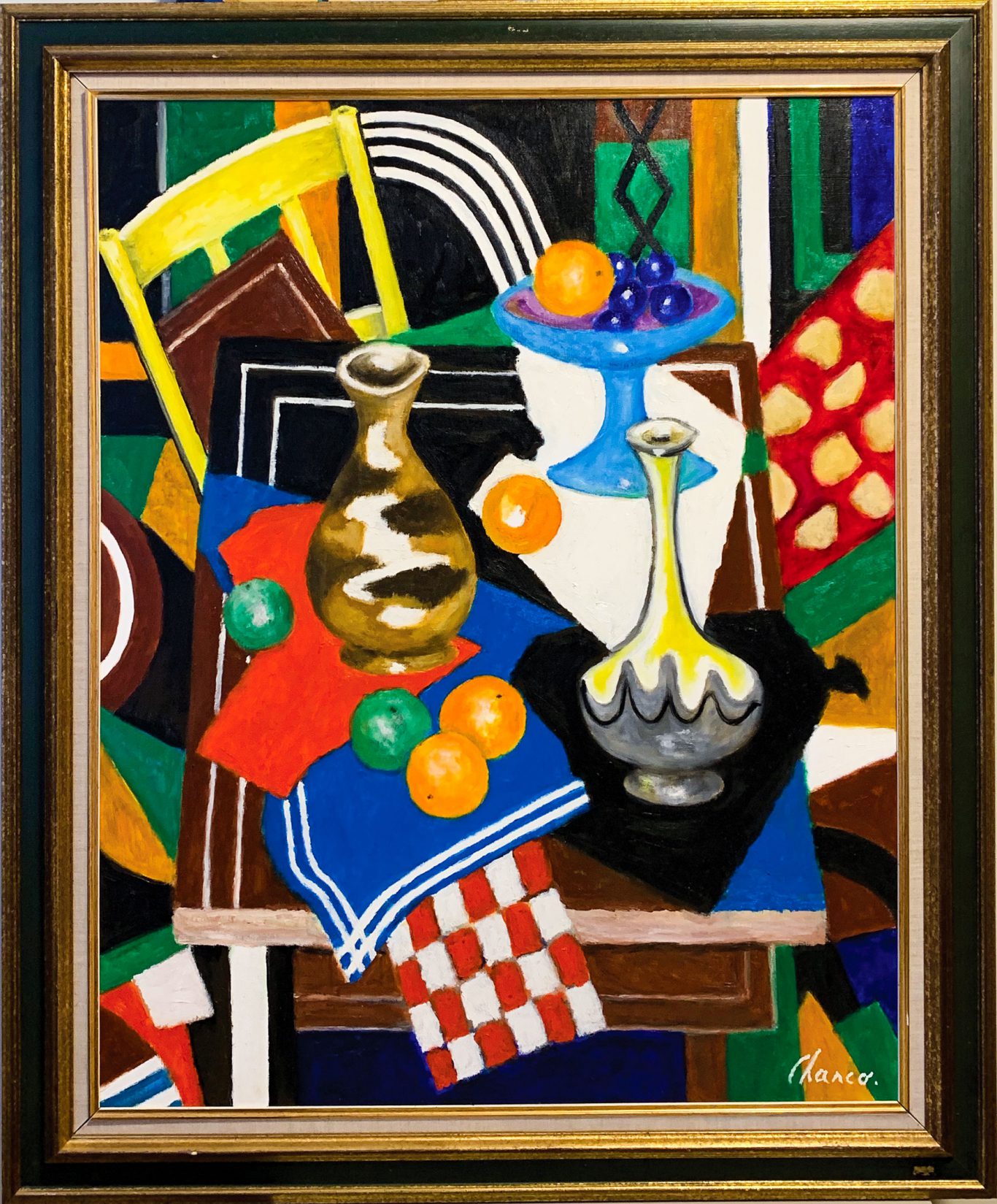 Art description
Roland Chanco (1914-2017)
Chanco arrived in Paris, aged 16 and interested in sculpture, where he worked with Marcel Gimond. He then abandoned sculpture in favor of paint and color. In Montmartre, he frequented the studios of Edmond Heuzé, Utrillo, and Gen-Paul, and became a very good friend of  Picasso.
Chanco left Paris in 1947 to live in Antibes, and later settled inland from Nice. During his early years in Paris and until 1939, he painted urban landscapes in a style somewhere between Post-Impressionism and Expressionism. In 1942, he abandoned landscapes for good, thereafter painting only figures and later, still-lifes.
For a while, Chanco painted groups of heads or figures in harsh colours set against a black or very dark background, in what he called his 'black period'. In 1960, however, he renounced this 'black period' and adopted a style directly derived from Picasso's Cubo-Expressionism, though Chanco's work was clown-like in his choice of subjects and his joyous and exuberant treatment of them. Although he broke down the subject in Cubist fashion, it remained very decipherable, painted in a range of harsh, almost incandescent, colours.
After 1970, in addition to his figures, he began painting still-lifes. These were carefully constructed, filled with a superabundance of elements including guitars, jars, baskets, small carafes, bowls, glasses, fruit, fish, lobsters - even a live cat attracted by the smell - all set on multicoloured tablecloths covering a table surrounded by chairs. Compared with Picasso's later works, to which Chanco's paintings clearly refer, his work appears minor, partly because of the clown-like elements already mentioned, although these do not apply to his still-lifes. However, his works have a density lacking in many other paintings in the style of Picasso.
Chanco exhibited at several annual Paris Salons and showed collections of his work in solo exhibitions.
More by Roland Chanco See More Art >
L’homme et la soleil rouge, 1952
50x35x1 cm
$ 7080
Portrait de Mathilde, 1972
91x73x2 cm
$ 9000
Nature Morte, 1974
73x100x2 cm
Piece Montee
80x70x2 cm
$ 6600
YOU MAY ALSO LIKE
Victor Leskin (1914 - 1998)
Lõuna-Eestis, 1970
65x100x2 cm
Serge Ignatenko (1975)
Dreams, 2016
76x62x1 cm
-->
Select your currency
EUR Euro
USD United States (US) dollar
Sign In Not registered? Sign up
Sign Up Already Registered? Sign In
FORGOT PASSWORD ?
Sign up Sign In
We do not share your personal details with anyone.
We use cookies to ensure that we give you the best experience on our website. If you continue to use this site we will assume that you are happy with it.Ok